The Arquebus is a new class of weapon - a firearm - introduced in version 3.9.2. It is the only weapon in this class in Pendor.

A Barclay invention used exclusively by their Arquebusiers, it introduces a unique flair and threat to the world of Pendor. You may come across a companion who wields one, but you will need to search for the bag of Bullets which he had haplessly lost in his journey (see bottom of page). If a proficient arquebusier was to advance through the ranks of knighthood, he will be presented with the opportunity to establish a supply chain for procuring these new weapons for their order, in the same fashion as one would procure Mettenheim Arbalests; what is more, if you have seized the Snake Cult stronghold, Quartermaster Kailin will also sell the gun and the bullets to you directly, with a very limited stock that periodically replenishes.

Until you reach the latter stage and gain access to the quartermaster, you can only obtain the arquebus by taking it from Donavan or by getting lucky in loot from hunting down what few Barclay parties reach Pendor's shores, thereby starting the arduous journey of mastering this device. It behaves very similarly to a crossbow: there is no time limit for aiming, it pierces shields, and reloads at a much slower speed, however you can move while reloading. Its damage is identical to the Mettenheim Arbalest.

The high velocity of its projectiles is excellent, but taking follow up shots and tracking fast moving targets can still be difficult without practice. It is advisable to aim for center mass, for, like crossbows, it does not have pinpoint accuracy, and despite plentiful ammo provided by the bullet bag, you will be forced to bear the reload with every bad shot you take. An advantageous feature of the Arquebus over other ranged weapons is that of very long-range and almost guaranteed shield penetration compared to powerful crossbows and bows. It has one major upside that greatly improves its appeal: lack of strength or skill requirements. Anyone who picks this weapon up and has ammo up may fire it. Equipping low strength support companions like Leslie is very feasible, and the AI may eke out a better use from the weapon.

Although the accuracy of the arquebus can be quite bad with low firearm proficiency, if you have a high enough firearms proficiency you can land hit with long-range shots more easily than bows or crossbows. However, it's best to not count on this because the weapon only works best when firing into a crowd, and the player may take a few shots to adjust for the drop.

The Arquebus does not make any of its ranged predecessors obsolete. The ubiquity of bows and crossbows, alongside high starting proficiencies and potential power of the former, make the arquebus more of a novelty/flavor choice than a practical one, best reserved for feeble companions and your personal knights. They are good weapons in a pinch, but not a total replacement. Bows maintain a much higher fire rate and better accuracy, while crossbows also maintain a higher fire rate and slightly better accuracy in general.

The only time that the player will face down arquebus-toting foes will usually be when facing a party containing Barclay Arquebusiers. Charging headlong at the guns can be harrowing, but a massed cavalry charge still works as well against a gunner line as it does against an archer one. Expect to take a few more hits than when you face other ranged weapons, but this really isn't that different from charging into an Empire crossbow formation or Ravenstern archer party.

The greatest use of this weapon by the player comes in siege situations. Since the player won't be on horseback, the arquebus can make for an devastating weapon against stationary soldiers on the enemy walls or the giant crowd of troops coming up a ladder at you. 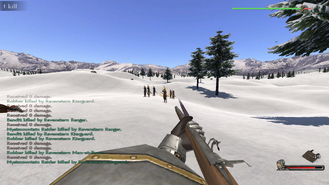 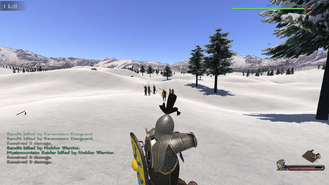 Arquebus being fired in third person
Add a photo to this gallery
Retrieved from "https://pop3.fandom.com/wiki/Arquebus?oldid=51661"
Community content is available under CC-BY-SA unless otherwise noted.