Mettenheim Greatswords are footmen that hail from the land of Mettenheim, picked from the ranks of the strongest, bravest and toughest of the many regiments of Mettenheim Regular Infantry. They can be hired through Heartbeat Quests as part of a Mettenheim Mercenary Group.

The Greatswords are the core unit for the Mettenheim army, being designed both as an anti-infantry and anti-cavalry force, their swords being able to cleave riders down from charging horses and to cut through armour like butter. Greatswordsmen are fast, and are well able to keep up with some heavier cavalry on the march. As a result they are known for their extraordinary toughness and endurance.

Greatswords are equipped with some of the best of Mettenheim's metallurgy, wearing very thick suits of plate, sallets and coming armed with a variety of two handed swords.

Overall, Mettenheim Greatswords can be considered among the best heavy infantry units available in Pendor. They need to be mixed in with units with shields, otherwise they are easy prey to enemy archers (and particularly horse archers), however once they get into melee range they will cleave through the enemy formation with ease, fighting much like iron-cased berserkers.

This troop is upgraded from Mettenheim Regular Infantry for 160 d and upgrades to Mettenheim Hauptmann for 200 d. 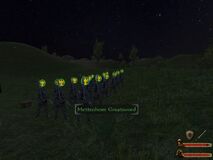 Greatswords fighting alongside Pendor Man-At-Arms
Add a photo to this gallery
Retrieved from "https://pop3.fandom.com/wiki/Mettenheim_Greatsword?oldid=30940"
Community content is available under CC-BY-SA unless otherwise noted.