The Rogue Knights faction of Pendor consists primarily of three Unique Spawns - Syla Uzas, Sheik Shalavan, and Sir Boris the Raven. These knights have eschewed their oaths to chivalry and honor and instead fight for their own, usually selfish reasons.

Sir Boris believes himself the Hero of Madigan and, while haughty and arrogant beyond measure, has attracted a cadre of Ravenstern and Raven Spear knights to his cause.

Sheik Shalavan considers Kadan Bahadur Khan of the D'Shar a mortal enemy for the latter's exiling Shalavan into the desert. Angered and determined, Shalavan means to overthrow the D'Shar Khan and come to power himself. His army contains a core group of D'Shar Windriders as well as a strong complement of other D'Shar cavalry.

Syla Uzas is simply a homicidal maniac, commanding a host of Empire Immortals and Shadow Legion forces who feel the same way about battle and bloodshed as their commander.

While all three of these parties are Unique Spawns, all three require funding for their armies, and thus can also be hired as mercenary companies by the main factions: Sheik Shalavan by the Empire, Syla Uzas by the D'Shar and Sarleon, and Sir Boris by Ravenstern and the Empire. 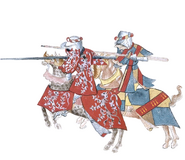 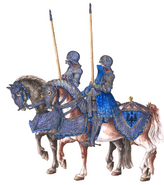 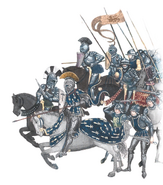 Syla Uzas
Add a photo to this gallery
Retrieved from "https://pop3.fandom.com/wiki/Rogue_Knights?oldid=45434"
Community content is available under CC-BY-SA unless otherwise noted.